Gerry scotti has been working in TV as a showman for 30 years, known as a host of the Italian edition of "Who Wants to Be a Millionaire". He is our new testimonial for Immun' Âge.

Gerry scotti is 60 years old, born in 1956. After giving up studying law, he began his broadcasting carrer as a radio DJ. He has been active in various fields, not only as TV presenter, but also as a former member of the Italian Chamber of Deputies, news caster and actor. He is very well known for his friendly personality. 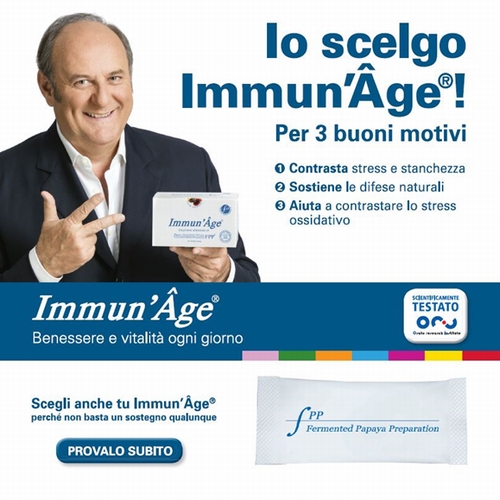 Gerry scotti doesn't like worldly things very much, but it's more important for him to have a peaceful time and share healthy meals with his family to be his own person. He talked about Immun'Âge as follows:

"I often get cold or bronchitis when I come outside after sweating under the lights in television studios or when I suffer from sudden temperature change because of air conditioning in summer. I have to protect my voice, it is important for someone like me who speaks in public even 6 hours a day! Then I came across "Immun' Âge". It's special and useful for me."

" When I feel tired of feel shortage of energy, I take Immun'Âge under the tongue. And during the influenza season in winter or during the changing of the seasons, taking Immun'Âge is my morning routine.