The season of 24 Hours Nürburgring has arrived.

One of the happy things about this event is to see old friends at the circuit once a year. It is like "Tanabata" (Star Festival in Japan) which has a legend of lovers separated by Milkyway but allowed to see each other just once a year.

The Aston Martin Team challenged the race with 4 cars, a pair of V12 Vantage from AMR, and one Vantage GT8 and one V8 Vantage from Aston Martin Lagonda Ltd. The Vantage GT8 is a GT car equipped with NECEL system, which allows oil change in much less time than it takes to refuel, since the process is similar to replacing a printer cartridge. Former Aston Martin CEO Dr. Ulrich Bez also joined the race at the wheel of V8 Vantage, who is what is called a walking dictionary of Nürburgring.

Soon after the race start, the racetrack got covered with thundercloud. When it started hail, cars began to slide as if they had been racing on an ice rink and 25 cars crashed.
All cars of Aston Martin managed to avoid the crash in this tragedy and had a smooth restart 3 hours later. However, out of the 4 Aston Martin, it was only the V8 Vantage driven by Dr. Bez that could finish the race and even achieved a podium. At the age of seventy, Dr. Bez still continues to race by taking FPP.
Close-to-Production Vantage GT8 had been perfectly leading in class for 20 hours until it dodged a low-speed car causing it to spin out and crash.
This year, the regulation was revised and they decided not to impose the speed limit for the last home straight. It should have given Aston Martin an advantage over other teams, but it was a real pity that they couldn't get the most of their higher maximum speed.
Mercedes AMG finished in first and second place overall way ahead of everyone else. The gap between the 2 cars was only 5.6 seconds. 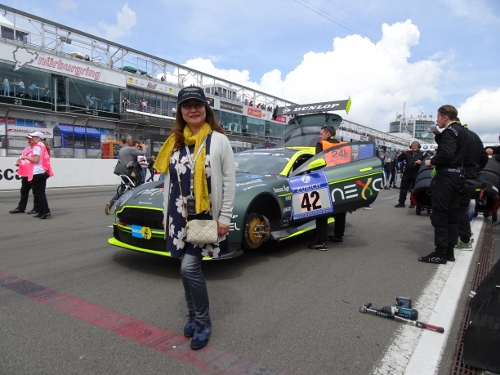