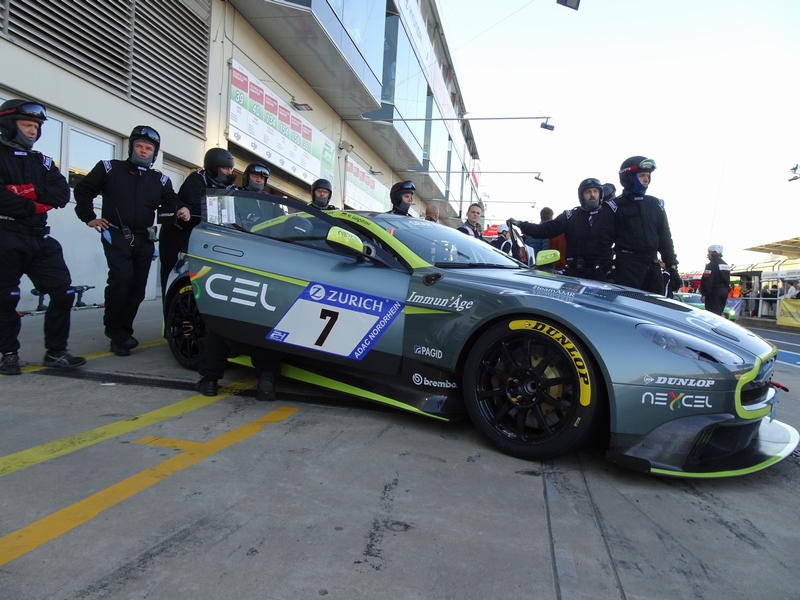 It was the best reason for tasting white asparagus.
The Nürburgring 24-Hour race was held from 25 to 28 May at the Nürburgring circuit again this year. The circuit, about 90-minute drive from the Frankfurt International Airport, is surrounded by deep green forests that seem to me typically German. The full course, consist of F1 GP course and "North Loop", is 25.359km long with 170 turns and has more than 300 meters of elevation change from its lowest to highest points. Because of its size, it is quite common to have totally different weathers on different sections of the circuit itself. Therefore, in this long 24-hour race, the tyre strategy holds the key to victory and we enjoy various dramas every year.

Aston Martin Lagonda Ltd., led by team principal David King who has been leading Aston Martin Racing since May, challenged SP8 Class again with the #7 Aston Martin Vantage GT8, seeking for a class win it just missed last year despite having performed so well without any machine trouble. GT8 is simply a perfect car since it is based on V8 Vantage they have kept improving for more than 10 years since its debut. Its reliable drivers are Darren Turner, Nicki Thiim, Markus Lungstrass and Peter Cate. On May 26, Qualifying 2 started at 9:30 in the morning and the #7 qualified 2nd with its best time 9:00.720. The newly released Lamborghini Lamborghini Huracan SU saved its face by qualifying 1st with 8:53.562 in the SP8 category.

On May 27, the race started at 3:30 in the afternoon. This year, the Nürburgring had a perfect weather and the temperatures went up to 30℃ in the daytime. We need winter clothes at night in the usual years, but this year it was so comfortable even in the team uniform with short sleeves. On the other hand, many tyres became punctured due to the extreme temperature and the teams that had selected soft tyres seemed struggling. Aston Martin GT8 showed flawless performance for 24 hours with best condition and not only won its class but also took 21st position overall. It was amazing to see Darren finished the race ahead of many SP9 race cars. At this point David King gave a quiet smile for the victory which took them two years of time. Further, Aston Martin was 8 laps (200km) ahead of Lamborghini Huracan in the second place.